Resource conservation and labour-based construction techniques are inherent part of the approach of rural road construction. Both of these roads including bridges are successfully completed and are under operation.

3.     Technical support for construction and improvement of Pharping - Humane Bhanjyang - Kulekhani Road (23 Km.) in Kathmandu and Makwanpur districts supported by PLAN International (Project adopting resource conservation measures was executed from 1996 and was completed on 2000)

4.     Technical support for the Feasibility Study and execution of various community based infrastructure projects in Parbat, Baglung, Surkhet, Dailekh and Pyuthan districts under RCIW-Phase I programme of HMG/WFP/GTZ (Programme continued for five years from 1996 to 2000) Rural roads, minor bridges, mule trails, small-scale irrigation and other different type of community infrastructure works were being implemented under this programme.

6.     Preparation of the following manuals for DDP/GTZ:

17.     Backstopping, progress monitoring and technical training for four Green Roads in Lamjung districts for RDSPL/GTZ during 1998-1999.

18.     Involved in the study on Institutional Arrangement for the Rural Development (Transport Sector) of Tarai, commissioned to SAPPROS by the World Bank in 1999.

19.     Carried out Touch-base Study on Local Road Committees (LRCs) in Palpa for LISP/Helvetas in January 2000.

20.     Technical and environmental assessment including detailed design of structures and cost estimate of remaining works of Benighat – Arkhet Road (42 km.) in Gorkha district for RDP/GTZ in 2000.

21.     Technical and environmental assessment of Filim – Chhekampar Mule Trail (24 km.) in northern Gorkha including preparation of work estimate and development of work strategy for remaining works under GDP/GTZ in 2000.

23.     Technical support for RCIW programme in Dailekh and Mugu districts (under respective DDC). Two rural roads and some other micro-irrigation and trails constructed under this programme in 2000/2001.

24.     Technical supervision of Chainpur-Nundhaki – Gufapokhari (43Km) and Chainpur-Barhabise rural roads (36 Km.) in Sankhuwasabha district under Rural Infrastructure Project from World Bank/DoLIDAR assistance from April 2000 to May 2002.

25.     Technical supervision of Benighat-Arughat-Arkhet road (47 Km.) being constructed in Gorkha districts under support of DDP/GTZ including Social Mobilization Works from February 2000 to August 2002.

26.     Construction supervision with of Tumlingtar – Chyangkuti district road (34Km) in Sankhuwasabha districts under RDP/ GTZ in October 1999 to September 2003.

28.     Consultancy Services for UN/WFP Bhutan for the preparation of Operational Guideline for Power Tiller Tracks to be implemented by Royal Government of Bhutan in May to June 2004.

32.     Construction supervision of Earthwork, major structures and EMAP preparation of Jumla – Kalikot Highway section (36Km) of Surkhet - Jumla Highway (Karnali Highway) in Jumla and Kalikot districts from April 2004 to April 2006 under Road Maintenance and Development Project (RMDP) of Department of Road, funded by the World Bank

35.     Construction supervision with community mobilization of Tamghas-Sandhikharka Rural Green Road Project (44 km) in Gulmi and Arghakhanchi districts under Infrastructure for Income since October 2004 to Sep 2007.

39.     Technical and Social Mobilization Support for  Assessment of Remaining Works and Construction Supervision of Roads under RCIW Programme in Dadeldhura and Darchula Districts from Dec 2008 to June 2009 supported by WFP Nepal.

SIDeF has worked on numerous projects throughout the country, and international; since establishment in 1994. Here is the data sheet of undergone projects in last two decades. 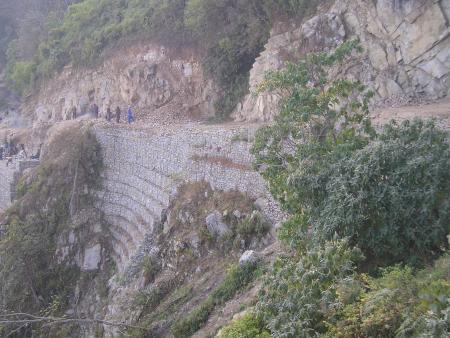